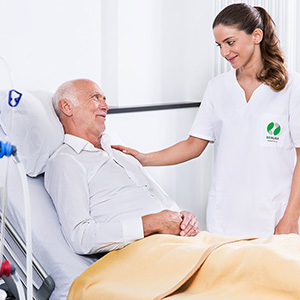 Hemodialysis, also spelled haemodialysis, commonly called kidney dialysis or simply dialysis, is a process of purifying the blood of a person whose kidneys are not working normally. This type of dialysis achieves the extracorporeal removal of waste products such as creatinine and urea and free water from the blood when the kidneys are in a state of renal failure. Hemodialysis is one of three renal replacement therapies (the other two being renal transplant and peritoneal dialysis). An alternative method for extracorporeal separation of blood components such as plasma or cells is apheresis.

Many have played a role in developing dialysis as a practical treatment for renal failure, starting with Thomas Graham of Glasgow, who first presented the principles of solute transport across a semipermeable membrane in 1854.The artificial kidney was first developed by Abel, Rountree, and Turner in 1913,the first hemodialysis in a human being was by Hass (February 28, 1924)and the artificial kidney was developed into a clinically useful apparatus by Kolff in 1943 – 1945.[5]This research showed that life could be prolonged in patients dying of renal failure.

Willem Kolff was the first to construct a working dialyzer in 1943. The first successfully treated patient was a 67-year-old woman in uremic coma who regained consciousness after 11 hours of hemodialysis with Kolff’s dialyzer in 1945. At the time of its creation, Kolff’s goal was to provide life support during recovery from acute renal failure. After World War II ended, Kolff donated the five dialyzers he had made to hospitals around the world, including Mount Sinai Hospital, New York. Kolff gave a set of blueprints for his hemodialysis machine to George Thorn at the Peter Bent Brigham Hospital in Boston. This led to the manufacture of the next generation of Kolff’s dialyzer, a stainless steel Kolff-Brigham dialysis machine.

According to McKellar (1999), a significant contribution to renal therapies was made by Canadian surgeon Gordon Murray with the assistance of two doctors, an undergraduate chemistry student, and research staff. Murray’s work was conducted simultaneously and independently from that of Kolff. Murray’s work led to the first successful artificial kidney built in North America in 1945–46, which was successfully used to treat a 26-year-old woman out of a uraemic coma in Toronto. The less-crude, more compact, second-generation “Murray-Roschlau” dialyser was invented in 1952–53, whose designs were stolen by German immigrant Erwin Halstrup, and passed off as his own (the “Halstrup–Baumann artificial kidney”).

By the 1950s, Willem Kolff’s invention of the dialyzer was used for acute renal failure, but it was not seen as a viable treatment for patients with stage 5 chronic kidney disease (CKD). At the time, doctors believed it was impossible for patients to have dialysis indefinitely for two reasons. First, they thought no man-made device could replace the function of kidneys over the long term. In addition, a patient undergoing dialysis suffered from damaged veins and arteries, so that after several treatments, it became difficult to find a vessel to access the patient’s blood.

The original Kolff kidney was not very useful clinically, because it did not allow for removal of excess fluid. Swedish professor Nils Alwall encased a modified version of this kidney inside a stainless steel canister, to which a negative pressure could be applied, in this way effecting the first truly practical application of hemodialysis, which was done in 1946 at the University of Lund. Alwall also was arguably the inventor of the arteriovenous shunt for dialysis. He reported this first in 1948 where he used such an arteriovenous shunt in rabbits. Subsequently he used such shunts, made of glass, as well as his canister-enclosed dialyzer, to treat 1500 patients in renal failure between 1946 and 1960, as reported to the First International Congress of Nephrology held in Evian in September 1960. Alwall was appointed to a newly created Chair of Nephrology at the University of Lund in 1957. Subsequently, he collaborated with Swedish businessman Holger Crafoord to found one of the key companies that would manufacture dialysis equipment in the past 50 years, Gambro. The early history of dialysis has been reviewed by Stanley Shaldon.

Belding H. Scribner, working with the surgeon Wayne Quinton, modified the glass shunts used by Alwall by making them from Teflon. Another key improvement was to connect them to a short piece of silicone elastomer tubing. This formed the basis of the so-called Scribner shunt, perhaps more properly called the Quinton-Scribner shunt. After treatment, the circulatory access would be kept open by connecting the two tubes outside the body using a small U-shaped Teflon tube, which would shunt the blood from the tube in the artery back to the tube in the vein.

In 1962, Scribner started the world’s first outpatient dialysis facility, the Seattle Artificial Kidney Center, later renamed the Northwest Kidney Centers. Immediately the problem arose of who should be given dialysis, since demand far exceeded the capacity of the six dialysis machines at the center. Scribner decided that he would not make the decision about who would receive dialysis and who would not. Instead, the choices would be made by an anonymous committee, which could be viewed as one of the first bioethicscommittees.