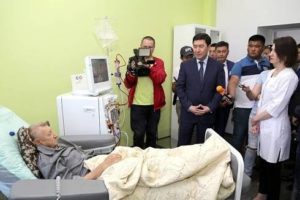 Hemodialysis center was presented in Saran. Erlan Koshanov, akim of Karaganda region, got acquainted with the work of the medical institution opened by public-private partnership.

B. B. NURA LLP, which owns a network of hemodialysis clinics across the country, became an investor. The cost of the center in Sarani was about 80 million tenge.

Today, the center has five artificial kidney machines. One of them is intended for patients infected with concomitant diseases such as hepatitis. One is still in reserve, the other three are already working at full strength.
Saran and Aktas on the account consists of 20 patients requiring hemodialysis. Previously, they were forced to go to the procedure in Karaganda three times a week. Now this need has disappeared.

Now Saransk center serves 12 patients, including patients from the villageы of Topar, Novodarovka and Aktas.
According to medical workers, the others while at will continue to go to the regional center.
In the state of Saransk hemodialysis center are working nephrologists, emergency physicians, two nurses, an orderly and a driver. They perform six procedures per day. However, the capacity to take up to 10 patients daily.

The center is equipped with modern high-tech devices, patients feel good between treatments. For each of them we place a state order in the amount of 27 000 tenge per one procedure. This amount includes hemodialysis, correction of concomitant diseases, anemia and food – snack and second course, always with meat. In a month the state order for one patient is more than 300 thousand tenge, – said Gamal Toksambayev, Director of the Central hospital of Saran.

Akim of the region was satisfied with what he saw. Erlan Koshanov asked the staff if they had enough medicines, to which he received an affirmative answer.

It is known that in the near future the investor B. B. NURA LLP plans to open a similar center in Zhanaarka district.